What is Brazilian Jiu Jitsu (BJJ) And Why Practice It?

You have maybe heard about it. Maybe you have seen it used in the UFC or in MMA (Mixed martial arts). Maybe you’ve heard your friends talk about it using words like “rolling” “open mat” “Triangle” or any other terms you think sound strange or, at the very least, don’t seem to fit with a martial art. But just what is this thing called Brazilian Jiu Jitsu (BJJ) and why do it’s practitioners talk about it like it’s the best thing since sliced bread?

First, I want to start by informing you that BJJ is vastly different than several other martial arts. I can’t tell you how many times I have heard someone substitute the word karate or kung fu for BJJ and think that they are “basically the same thing.”  Yes, all forms or martial arts were developed as a form of self-defense, but BJJ is vastly different than most of the traditional arts that you heard about while growing up. Arts like karate and tae kwon do have a heavy focus on striking including punches and kicks, but brazilian jiu jitsu has almost 100% of it’s focus on the grappling aspect of self defense. When I say grappling, I mean that the goal is to grab the attacker, bring them to the ground, and use leverage, momentum, chokeholds, and submission holds in order to either choke your attacker unconscious, badly damage one of their joints, or cause your attacker to “tap out” (which means to give up, or submit to you). BJJ allows for it’s students to practice these techniques with a level of intensity which would be unsafe for karate students or several other martial artists to practice with. It is largely due to this “resistance training” or “simulated fighting” that makes BJJ one of the best martial arts to learn for a one-on-one self defense situation. 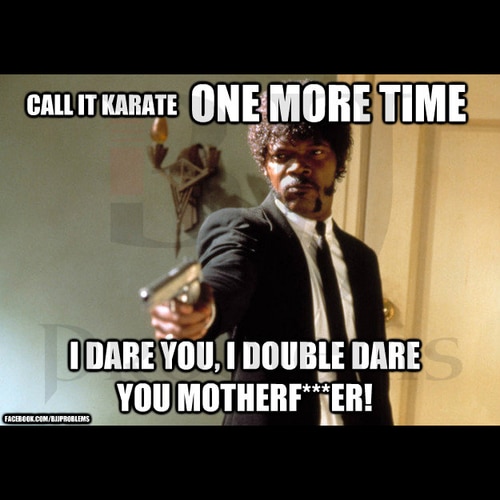 But Self-Defense is definitely not the only thing that our students can take away from their BJJ classes. BJJ classes offer the students a fun way to stay in shape. Many people, myself included, can’t stand the monotony of running on a treadmill, using a stationary bike, or any other form of exercise that could be described as being very static or boring when compared to Martial arts. BJJ certainly offers the same health benefits of any of these activities while also being mentally or cognitively stimulating and engaging. This is one of my favorite aspects of jiu jitsu.

Jiu Jitsu is also a great stress relief and escape. Jiu Jitsu is both physically and mentally challenging. When you are training, it is easy to “get lost” in it. It seems as if nothing else in the world matters at that moment because you are struggling and fighting against someone who is laying on top of you, trying to gain dominant positions, and ultimately trying to submit you. At that moment, there is no room in your mind to think about your angry boss, your approaching deadlines at work, or the chores that need to be done around the house. Now obviously, these problems don’t go away just because you are workin

g out, but the escape is needed sometimes, and it’s a much healthier escape than the vices people more commonly use for such purposes.

In addition to the temporary escape, you also develop a lot of self-discipline, drive, and perseverance through the art of BJJ which will help you to overcome all of these things that are stressing you out.

I could go on and on about the benefits of training Brazilian Jiu Jitsu, but this post would become far too long.  I would like to leave you with this: the most important benefit of Jiu Jitsu. BJJ and self-defense in general, is kind of like insurance. It’s better to have it and not need it, than to need it and not have it.

It is because of all of these great reasons that BJJ is becoming increasingly popular for people from all walks of life. I train with police officers, accountants, sales people, IT technicians, self-employed people, high school students, and the list goes on and on. All of these very different kind of people have all realized how positive BJJ is to have in their life. As the years have gone by, awareness about the martial art and sport are growing exponentially every year. Don’t wait any longer! Stop waiting for the perfect time, and just dive it! The time to start is never going to feel “right.” I will leave you guys with a quote that absolutely rings true and resonates with each and every training partner I have discussed it with.