The BJJ Belts are Both Important and Arbitrary: Part 1

BJJ belts have lost more meaning to me as I make it deeper into my BJJ career. If you would’ve asked me a couple months ago if I was excited to get my Black Belt in Brazilian Jiu Jitsu, I would have confidently said, “Absolutely!” However, more recently, I have been feeling less and less excited about the prospect of being awarded my black belt. My excitement is still there, but it is far reduced from what it was. However, this has nothing at all to do with a reduced interest in BJJ, and my passion for the self defense, martial art, and sport are as high as ever. Doesn’t this sound a bit paradoxical?

On the flip side, I believe the BJJ belt system is incredibly important and necessary to have in place. It certainly sounds like I’m contradicting myself, but allow me to explain. 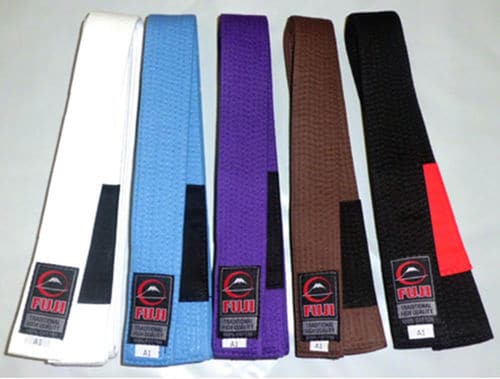 Why have I lost some excitement about the prospect of being awarded my Brazilian Jiu Jitsu Black Belt?

I used to attach a lot of meaning to the different belts that one receives in Brazilian Jiu Jitsu. Being awarded a blue belt meant that you had a basic understanding of defense and were familiar with some of the basic concepts of Jiu Jitsu; it also meant that you are better than white belts. Being awarded your Purple Belt showed that you are a seasoned BJJ practitioner and have knowledge of most well known BJJ techniques; it also means you are better than blue belts. So on and So forth.

If you’ve already been involved with BJJ for a while, I’m sure you already see where I’m going with this. This concept has been addressed with cliche’ sayings such as “a belt only covers 2 inches of your ass, you have to cover the rest.” These kinds of phrases are repeated so much that I feel like the saying loses weight, so I will try explaining to you, in my own words and demonstrating with my own experience, why belts, in and of themselves, are meaningless.

When I was a white belt and had been training BJJ for about 7 months (I also had prior wrestling experience), I entered my first BJJ tournament. I submitted my way through the white belt division. I was invited to compete against a blue belt who had noone else in his division, and I submitted the blue belt as well. I was invited into the purple belt division and was far outmatched in my matches against purple belts. However, I was a white belt who defeated a blue belt! I must be worthy of being a blue belt at that point, right? However, I trained for an additional year and a half after that tournament before being given my blue belt, and I was excited about getting my blue belt. After all, I deserved it! When I had been awarded my blue belt, I was met with several comments from my teammates both congratulating me and telling me that it was “long overdue.”

Of course, I eventually was awarded my purple belt. As I was called up to have the belt tied around my waist, I could hear the typical applause that goes with promotion along with comments such as, “It’s about time.” Once again, several people told me that the purple belt was long overdue. It was a little frustrating that I had constantly felt, at each belt level, like my skill level had exceeded my belt color. Once I had been awarded my purple, I finally felt like my belt color had caught up to my skill level (whatever that means).

I spent several years as a purple belt. After about 2 years as a purple belt, I felt as though my game began to skyrocket. Several people began telling me that they thought I would be getting my brown belt soon. I didn’t believe that I should. I didn’t yet feel worthy of a brown belt. In my mind, brown belts were absolute killers, and I didn’t see myself at that level yet. After about 1 year of people telling me that I should get my brown belt and people talking about it, I was awarded my brown belt. I still wasn’t sure that I was worthy of a brown belt, but I remember the night I was awarded it, I was over the moon, because in my mind, I was now one of the “elite” upper belts that everyone looks up to and respects.

I’ve been a brown belt for a year and a half now, and most of my time as a brown belt, I have been eagerly looking forward to being awarded my black belt. I had been so excited to finally reach the “top” belt and become one of the “untouchables.” However, as I draw closer and closer to it, I am seeing that the pedestal which I’ve placed the Black Belt on for so many years is not as high up as I once thought. Or rather, the pedestal is not so far out of my reach anymore since I have “grown taller” so to speak. As a brown belt, I have now submitted 4 black belts in competition. On the flip side, I’ve also been submitted by at least 1 purple belt. This begs both of the questions, “how can I deserve a brown belt if a purple belt submitted me?” and “Why haven’t I received my Black Belt if I’ve submitted 4 Black Belts.” The arbitrariness of the belt color grows clearer.

As I continue to see Black Belts who I can best while competing and purple belts who can give me quite the challenge or even submit it, I really have come to realize that the belt color, at least as a determination of applied skill, is fairly arbitrary, and there is not really any point at which you can really definitely say that you have “reached blue belt level” or “reached brown belt level” because the belt levels are so ambiguous and subjective. If you feel like you were already worthy of the belt you have just been promoted to, receiving the belt is a little bit like getting your High school diploma or College degree in the mail. You were already a graduate weeks ago, so why does finally receiving this piece of paper (or belt) mean anything? You’ve already put in all of the work. You’ve already achieved the non-material; at this point, the material is fairly meaningless.

My point is this: Anybody can beat anybody. Belt color is only belt color and skill is skill. If you are a blue belt, and you have already been submitting purple belts regularly in practice and in competition, being awarded your purple belt may feel a little empty because you are already aware of your own skill level: You don’t need a new belt for self-validation! A belt only speaks about your skill level to those who don’t know you. And once they see you roll, your skills will speak louder than your belt color.

One last reason I don’t hold belts, even the Black Belt, in as high esteem as I used to, is because I know even Black Belts can be beaten by lower belts. Defeat is something that plagues everybody, even the best. As a white belt you perceive black belts as unbeatable, the same way that young Anakin Skywalker believed Jedi’s to be invincible (I had to use a Star Wars reference with the new movie coming out). But as a Brown Belt, I know that Black Belts, as highly skilled as they are, are still subject to defeat and failure just like everyone else. For this reason, my excitement for getting my black belt has dwindled because I now see that being a black belt doesn’t make you a Mythical, Unbeatable Jiu Jitsu Machine.

The only real thing that a Black Belt, or any belt for that matter, is, is a trophy. It is something you can physically point to and say “Look what I earned,” But that statement and idea is also what makes belts extremely important…… Stay Tuned…